Blog / How to Stay Motivated: Pushing Through Plateaus and Burnout

Undoubtedly, a day will come where you've lost steam. This doesn't necessarily mean you don't care anymore, but hitting plateaus and even burning out is very possible at one point or another. With this module, we'll do our best to prepare you for if and when that day comes.

What to do when you're past the honeymoon phase

You know how everything is great and you're excited all the time in the beginning stages of a new relationship? The same thing happens when you launch a new business or project. You're going to feel pumped because:

When it's just a general malaise it's called a plateau.

When it's so bad that you really can't do anything but stare catatonically out the window, it's called burnout. And it's the number one obstacle that keeps people from following through on their dreams.

So let's talk about how to push through it.

How to overcome burnout or push through a plateau

Action Step:
1.Write yourself a "why" letter. Entrepreneur Bill Roth recommends tackling burnout before you even hit it. In his guest post on 'trepLife Dad, Bill suggests recording some of that awesome honeymoon energy in a "why" letter to yourself.

Your "why" letter should include:

Put the letter in a safe space and when burnout hits, pull it out. It'll be a great little boost, just when you need it. 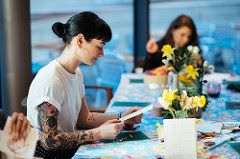 2. Reach out to your Tribe. It's so, so common for entrepreneurs and leaders to think that they can do it all, all by themselves but the reality is that nobody can do it all. When you're feeling like you just can't handle another task, take half a day to figure out who could. You've probably built up a Tribe at this point and those people have skills that you can utilize. Maybe you have someone who will do something as small as clean out your email inbox for you or perhaps you have another one who can do something as big as run your fundraising campaign for a while while you take some much needed R&R. It's okay to loosen the reins a little bit and let your people help you out.

Action Step: Before you hit this point of needing to tap out, even for a day, make sure you know who you can and will reach out to to help with tasks / step in when you need to break away. Make sure you establish an understanding about the support so that they're prepared to be there for you when the time arises.

Action Step: Take a day, weekend, or even a week off - whatever you can manage.

3. Work on capturing some of that earlier energy. It's hard to get back that honeymoon energy but it is possible! Take some time to think about what excited you in the beginning and then replicate some of those things. Maybe you were really, really psyched when you were doing research because you like learning about new things. If that's the case, here's an action step: take some time every day to explore a new topic, even if it's not directly related to your project. Or maybe you were talking to a lot of people in the beginning stages but now you're just staring at your computer all day. If that's the case, here's another action step: start arranging meetings during your lunch and dinner hours, so at least you're getting a little bit of face-to-face contact every day. You'll be amazed at how much better you feel.

4. Recognize the little wins. While you undoubtedly have a big, world-changing goal for your project or company, the reality of getting there can be really, really hard. That's why it's important to recognize and actively acknowledge the little wins throughout the entire life cycle of your project. One way to do this is by setting yourself and your Tribe reachable milestones. Then, when you reach those milestones, reward yourself. The milestones don't have to be big. In fact, they can be as small as writing the emails you've been putting off. And the rewards don't have to be big either - treat yourself to a glass of wine or the pair of earrings you've been admiring. Those little moments of happiness and satisfaction will help propel you through the roughest patches.

5. Identify measurable "wins" that support your core values. Ilan Mochari writes in his post 7 Reasons It Always Pays To Celebrate Small Victories that when you're figuring out what your milestones are, it's a good idea to make sure that they're pegged to the core values of your mission.

Action step: touch base with your Tribe and brainstorm what those core values are and then plot out reachable milestones and measurable, concrete steps you can take to get there. Every time you complete one of them steps, have some kind of small celebration and when you hit one of the bigger milestones, have a bigger celebration!

6. Let other people acknowledge your wins - big or small. Let your significant other or your friends know that you need their support, even if the achievements you're sharing seem relatively small. Having that backup makes all the difference when we're pushing through the rough patches. Additionally, make sure that your bigger wins get noticed beyond your immediate circle. Make some contacts at your local newspaper or on your favorite blog and get the news out there! Even if you can't get it that big, though, utilize social media to share your exciting moments.

Tags
motivation
Comments
I have a lot of passions, many related to arts and culture, but I have difficulty with execution. - Elizabeth Allred November 8, 2019
Login or create an account to post a comment
- You Just now